Making History: The First Sounds from Mars Delivered by Knowles

At the NASA SuperCam Live Webcast in March 2021, history was made when it was announced that the first audio ever recorded from the surface of Mars, the Martian winds, was captured from Jezero Crater. The historical event was made possible because of a tiny microphone housed within SuperCam aboard the rover, supplied by Knowles. Then, on May 7, 2021, NASA announced that the same microphone picked up the sound of the Ingenuity Mars Helicopter on its fourth flight, on April 30 – a feat that was not expected to happen due to the thin Martian atmosphere and Perseverance’s far proximity to the helicopter. 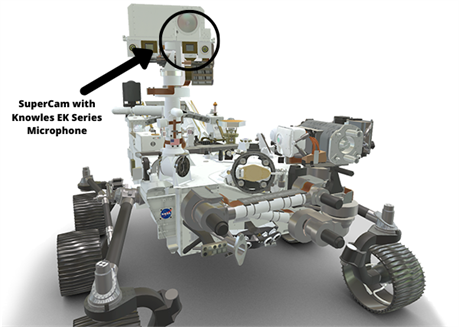 The Perseverance rover, which spent eight months travelling through space as part of NASA’s Mars 2020 mission, was sent to learn more about the mysterious planet and gather important data that has never been collected. Specifically, NASA scientists are searching for information regarding the formation of the planet as well as geological processes that have made Mars the planet that it is today. Most importantly they are looking for evidence that Mars has the potential to host human life.

The Knowles and NASA relationship isn’t new -- In 1969 when the American crew landed the Apollo Lunar Module Eagle on the moon, Commander Neil Armstrong spoke his famous words into a Knowles microphone, “That's one small step for man, one giant leap for mankind.” Since then, Knowles microphones have been on other NASA missions including The Mars Polar Lander and the Phoenix Lander. There have been eight previous spacecraft that have made it to Mars, but none of them have been able to deploy microphones to capture the sounds of the planet until now with the Mars Perseverance.

In order to effectively capture sound from Mars, NASA’s extremely extensive quality requirements required a miniature microphone because of the strict space and weight considerations, NASA chose the Knowles EK series microphone for SuperCam due to its durability, high acoustic sensitivity, and low vibration sensitivity needed to transmit sound from the Martian atmosphere. The EK microphone also features low noise and high bandwidth, making the sounds captured by the microphone just as good – if not better – than if you were to be on the Red Planet and hear it yourself.

Besides capturing the initial first sounds of the Martian winds, the Knowles microphone’s central role in the mission will be to capture the ‘popping’ sound of rocks when they are lasered by the Perseverance rover. The impulse response will then create an audio signature. This audio signature data will help scientists to better understand what the rocks are comprised of, essentially complementing the laser in material analysis from Mars. 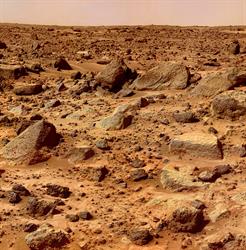 The new sounds from the Ingenuity Helicopter came as a surprise. SuperCam scientists ran tests and simulations prior to the Mars 2020 landing and audio was not expected to be captured due to the complicated nature of the Martian atmosphere. The EK-Series microphone quality made the audio capture possible. David Mimoun, a professor of planetary science at Institut Supérieur de l’Aéronautique et de l’Espace (ISAE-SUPAERO) and science lead for the SuperCam Mars microphone, said in the recent NASA announcement, “the recording will be a gold mine for our understanding of the Martian atmosphere.”

The Mars atmosphere is known to be similar to Earth’s, displaying cold climates, valleys, and ice caps. The planet also lacks tectonic plates and continental drift, making it an area of interest as we see more and more natural disasters wreaking havoc on Earth.

There is still much more to be discovered about Mars -- Knowles microphones help NASA researchers get one step closer to bringing humans to the planet by recording never-before-heard sounds that help scientists understand the properties of the wind, rock, and other natural resources that are imperative in order to continue to ethically explore the planet.

While a future of humans creating civilization on Mars is still just an idea, Knowles microphones are actively listening in the service of new developments in research. We’re excited to be a part of this exploration and contribute to collecting the critical data that NASA is using to shape the future of life as we know it.